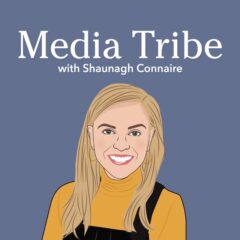 Shaunagh was one of our participants on our first mentoring scheme in 2012 and was mentored by the BBC’s Evan Davis. Shaunagh is now based in the New York at the Financial Times and has launched a new podcast called ‘Media Tribe’ which is already number one in the ‘Society and Culture’ Apple podcast charts in Ireland. Shaunagh explains:

‘I interview some of the world’s most respected journalists and filmmakers about their journey into journalism, impact they’ve had along the way and a crazy experience that never made it to air, e.g. C4’s Jon Snow, CNN’s Nima Elgabir, the BBC’s Kate Adie and  Lyse Doucet, the Washington Post’s Rana Ayyub, NY Times’s Malachy Browne, Oscar-nominated directors Julie Cohen and Ed Watts.’

Followers of  Shaunagh’s work won’t be surprised that Evan also features in the roll call of interviewees!

You can see the trailer here and the podcast will be available on all of the usual podcast spots – Apple, Google, Spotify. Follow @Shaunagh on Twitter to find out about upcoming guests!