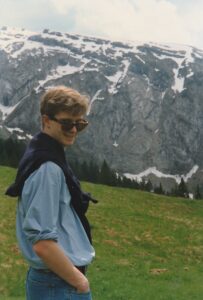 What a weekend last weekend proved to be for the John Schofield Trust. Such a mix of emotions – grief and sadness for Susie, our founder and John’s widow, and those who knew John, but also moments of real joy in remembering the person John was and in the achievements of the Trust in the intervening 25 years. So many current and past mentees spoke of how the Trust has helped and supported them in John’s name.

Our campaign engaged new supporters and re-engaged loyal old friends of the Trust. Thousands of people viewed the  #RememberingJohn film and you can see a round-up of the Twitter highlights here. Susie found the emotional strength to be an eloquent inteviewee on Sky News,  BBC Breakfast, and talkRADIO and the World Tonight paid poignant tribute to John at the end of their programme on Friday night.

One of our trustees, Matt Peacock, wrote a very personal and powerful piece about the impact on him of a  toss of a coin on the day John died. 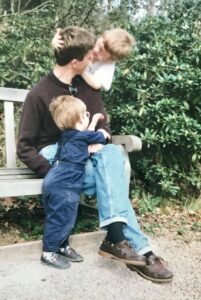 Many, many people shared their memories of John on social media giving a real sense of John as the person he was. Nowhere was the passage of 25 years shown more clearly than the posting of this photo  by John’s now grown-up nephews, Jack and Harry.

Cat Kerr made us smile among the tears with her memory of John’s terrible dancing : ‘A kind and entertaining man, with a very special sense of rhythm. I just wish I had photos of the BBC disco at a do in Birmingham in the late ’80s; not many people can boogie against the beat…’.

Alison Black, who shared a house with John, as well as working with him at Channel 4 Daily, remembered him for his kindness and sensitivity: ‘He understood people who didn’t fit’.

The work of the Trust came to life when former mentee, Dan Johnson, tweeted: ‘I shall always be grateful for the support I received as a young journalist through the mentoring scheme set up in his name, especially as I report live on tonight’s BBC News at Ten’. 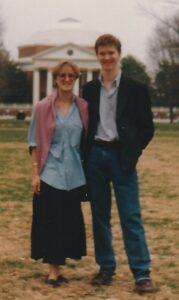 Sandy MacIntyre, VP News AP and ex-ITN, summed it up perfectly: ‘John would so admire what Susie has done in his memory and for him to see so many young journalists from diverse backgrounds get a helping hand to launch their talents onto the stage he trod is perhaps the greatest way we can honour him’.

The Trust ran a fundraiser alongside the campaign and we would like to thank those people who donated.

There is still work to do to offer practical solutions to welcoming those people from disadvantaged backgrounds into the news industry. We still have a way to go to hit our target for donations, so please do support us here if you are able.

Thank you for all your help in making our campaign reinforce John’s legacy of making newsrooms welcoming to all.