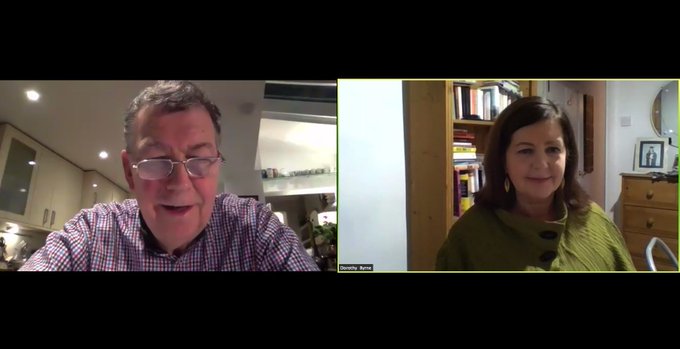 ‘Captivating masterclass with @dorotheabyrne “Diversity matters. You can not tell the news properly if you don’t have a diverse newsroom that represents the society”.’– Comment from a member of our audience on Twitter

The first speaker of our 2021 masterclass programme famously introduced herself as ‘the first old lady to be invited to deliver the MacTaggart lecture’ back in 2019, going on to describe herself, with tongue in cheek, on that occasion as ‘the Methuselah of TV’.

On Thursday night (21 January 2021), we had 200 people sign-up for the masterclass, many of whom are students, and the relevance and value of what Dorothy had to say during our hour’s conversation was impossible to miss.

That’s not surprising of course. Dorothy is one of the most influential figures in the news business, a former current affairs programme editor and executive producer and for well over 20 years the driving force behind Channel Four’s journalism.

She was the Commissioning Editor for Channel Four News itself as well as programmes such as ‘Dispatches’, ‘Unreported World’, ‘Sri Lanka’s Killing Fields’ and the Oscar-nominated documentary ‘For Sama’.

We started by talking about her assertion in her Edinburgh TV Festival MacTaggart Lecture two years ago that television should do and say ‘big things’ and aim to change society. Did she still think that? Yes, was the unequivocal answer, more than ever in fact.

That view had been shaped by her early years working at Granada Television on ‘World In Action’, perhaps the most influential and ground-breaking current affairs programme of all.

And it was Dorothy’s view that television could fight to change society without giving up the key virtue of ‘due impartiality’, a legal requirement for all broadcast content in the UK but something increasingly under pressure on many fronts. Impartiality underpinned by regulation was our greatest protection against the onslaught of Trumpist ‘fake news’ and ‘alternative facts’, she believed.

‘If we aren’t accurate and impartial, people won’t listen to us’ – Dorothy Byrne

We talked a fair bit about diversity too, with an acknowledgment that talk on the subject within the news industry has too often outweighed action. That’s probably changing, still too slowly though.

Women in journalism get a better deal these days than when Dorothy started, though the battles for equal pay at the BBC and elsewhere have shown how far there is to go. And women with children, returning to work after maternity leave or a career break, still find the cards stacked against them too often, or simply aren’t considered on equal terms for promotion or plum assignments.

There’s progress too, on the proportion of the news workforce from a BAME background, though the speed and depth of that is less clear. Many of our online attendees mentioned problems in ‘getting on’ in organisations once they’d got a start, and retention of BAME staff was an issue as well… disillusion and frustration were leading quite a few to give up the fight.

‘Privileged people who have money can afford to have job insecurity, less privileged people can’t. But that’s the way the industry has moved, to short term and freelance contracts. We’ve gone backwards’ – Dorothy Byrne

Dorothy and I both agreed that on the issue of class diversity – ‘social mobility’ as it’s called by some – journalism has actually gone backwards over the past 30-40 years. Two main reasons for that: the almost total disappearance of starter jobs in properly-funded local media over that period and a consequent switch from training journalists ‘on the job’ to teaching in university and college classrooms.

These days almost every single young journalist has a degree – great in some ways for a well-informed workforce, but bringing with it a real risk of closing the industry’s door to the 50% of young people who don’t go to university for whatever reason. The John Schofield Trust, of course, works hard to counter problems like that.

Many of the online audience wanted specific advice about how to make their mark in the industry, how to get noticed and make contacts and Dorothy offered plenty of good ideas.

‘I always recommend sycophancy. Look at the credits of programmes, email the people who made then saying how much you loved it, and ask them questions’ -Dorothy Byrne

Watch the credits of programmes that impress you, she said… make a note of the people involved and find a way – any way – to contact them. Introduce yourself, tell them about your work, be pushy (but never rude) and don’t be discouraged… keep going. No-one ever said it would be easy.

Dorothy leaves Channel Four in a few months after having a transformational effect on the organisation’s work over the past 20-plus years and on our industry for nearly four decades. This autumn she takes over as President of Murray Edwards College (formerly New Hall) at Cambridge University. They’re lucky to have her.

She is a great supporter of the work of the John Schofield Trust and we were extremely fortunate to be able to draw on her experience, wisdom and advice for the first masterclass of 2021.

You can view the masterclass via our YouTube channel here.