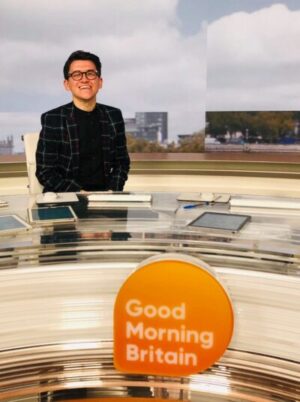 ‘Granada Reports has been a part of my family’s household since as young as I can remember. Hearing Lucy Meacock, the reigning anchor for 32-years introduce my feature with Liverpool musician Jamie Webster is a moment I will never forget.

My interview with Jamie was special because, similar to myself, he is a working-class lad from Liverpool with a dream, and so it was fitting for my first on-screen appearance to be with him.

His debut album, We Get By, is based on the trials and tribulations of growing up working class. Whilst Liverpool is massively known for its music scene, similar to journalism, it is still an unconventional career to have and is extremely difficult to break into when you have no connection.

Fortunately, his talent is being recognised around the world and it was a pleasure to sit-down with him at what is both the start of his career and mine.

Diversity exists in many forms, but like disability, social mobility is hidden within newsrooms; alas the numbers show it’s an area which is greatly underrepresented and is often forgotten about when we talk about diversity.

And whilst the appeal to be on-screen does not come naturally to me, having now had this opportunity and having heard the positive feedback, it has proven no-one should ever underestimate their abilities, and I hope in the future our newsrooms will better reflect our society in all its forms.

That’s why I am proud to have been a mentee on the John Schofield Trust in 2018 and fully support its ethos in helping journalists from underrepresented backgrounds to breakthrough, be it on-screen or off-screen.