The John Schofield Trust has partnered with the Journalists’ Charity to provide financial support to early-career journalists.

For over 150 years the Journalists’ Charity has offered financial support and welfare advice to struggling journalists across every sector of the profession, nationwide. And this year, the charity is proud to announce that its support services are now reaching an even greater number of the industry, with the launch of its new initiative aimed at helping early-career journalists.

The First Jobs Fund will support new journalists by subsidising some of the costs of starting out, including accommodation, transport, and equipment expenses. With this fund, the charity is looking to the future, and playing its part in supporting the next wave of journalistic talent. 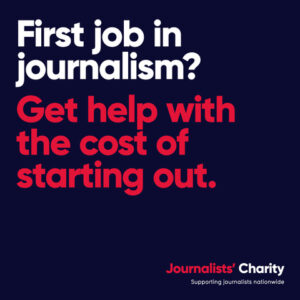 For many of those interested in the John Schofield Trust mentoring scheme, the First Jobs Fund could be the next stage of practical support to help you in your journalism journey. To be eligible for its support, applicants must be able to show they are new to journalism – either working in their first paid role, as a full-time freelance, or about to start a new role with a firm offer letter.

The Journalists’ Charity supports journalists at every stage in their career. Make sure you keep in touch with them by following them on socials and signing up to become a free supporter, all links can be found here.